The insights in this article will enable you to clearly foresee the stock market’s direction in the months and years ahead by showing how the availability of money affects the stock market.

I will guide you through the last 60 years of economic data comparing the Federal Reserve Prime Rate and the S&P Composite Index, so you can assess the current state of the economy and, therefore, the stock market direction.

How Do Interest Rates Affect The Stock Market?

Firstly, we start with a brief understanding of Monetary Policy.

“Monetary policy is the process by which the government, central bank, or monetary authority of a country controls (i) the supply of money, (ii) availability of money, and (iii) cost of money or rate of interest, in order to attain a set of objectives oriented towards the growth and stability of the economy.”[1]

OK, so that’s the painful bit out of the way. Let’s look at what that really means:

60 Years of Interest Rates vs. The S&P Composite Index

Figure 1 shows you exactly how monetary policy affects the stock market by overlaying the U.S. Prime Interest Rate on the S&P500 returns from 1954 through October 2009.

What is the prime rate?  The prime rate is the cost for businesses or consumers to borrow money.  The rate published is usually the rate for favored customers with a lower risk profile; if your risk profile is higher, you may have to pay a higher interest rate.

The prime rate is important because if a company has 80% of its capital from bank loans and has a 5% profit margin.  Imagine, what would happen to the company profits if interest rates went from 5% to 15%? The company’s profit margin might be reduced by 2% or nearly halved if all things remained equal.

Therefore a company may seek to maintain profit margin by reducing its costs and attempting to pay back some of the debt.  More often than not, reducing cost often comes in the form of reducing people; therefore, unemployment increases.  Companies could also increase the cost of the product or service they provide; however, this might lead to fewer sales and less profit, so they would need to shed staff anyway.

We can see clearly in this chart what the biggest influence over the stock market direction is.

Something quite different happened in 2008 to cause one of the most violent global stock market crashes since the Depression.  This time it was not the cost of money but the money supply, the other factor mentioned in our definition of Monetary Policy.  The availability of money was severely restricted because of a lack of trust between the financial institutions.  None of the institutions knew who had how much exposure to the Sub-Prime Market that was at the time collapsing.  Therefore the banks stopped lending to each other, drastically reduced lending to businesses and the consumer.  This caused a much quicker and more devastating effect on the economy than slowly increasing interest rates could have done.  This was akin to somebody just turning the lights off.

What Is A Good Interest Rate For Stocks?

60 years of research shows that interest rates below 10% are good for stock market returns, below 5% produces strong stock market performance, and close to 0% produces economic crisis recovery and stock market booms. The availability of cheap money through low interest rates creates speculation in property, stocks, and commodities, which must be controlled with good financial oversight and regulation.

The most common causes of stock market crashes are not interest rates, but poor institutional risk management, easy access to credit, and equity bubbles.

Here is a live chart of the Federal Reserve Prime Rate. Remember, rapidly increasing interest rates, especially above 5% will cause stock market declines.

Unleash The Power of TradingView 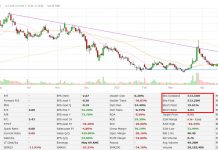 What is the Float of a Stock? Find, Calculate & Trade Float.

When to Average Up Stocks?

What Happens When a Stock is Delisted?

Are Stocks Liquid Assets? What’s a Liquid Stock & How to Find Them?