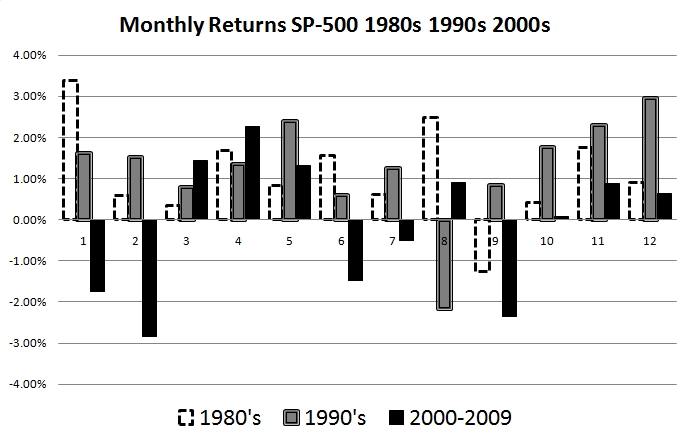 A common question I get asked by students is “Which is the best month to buy stocks?”.

It is a good question and although each day week and month is different from year to year there are common trends across the decades, we will seek to answer the questions using 35 years of statistical data.

The following chart is a Copyrighted extract from the Liberated Stock Trader Book, it analyses the returns from the Standard & Poors 500 index for the last 30 years.

You can see that for the last three decades March, April May, October, November, and December were the only months that registered positive returns.

You can also see from the three decades the last ten years (2000 to 2009) have been the worst in terms of total returns.

The Seasonal Effect in the Stock Market

There is a seasonal effect and it does repeat itself.  This could be due to a whole host of factors, retail sales, summer commodities harvest and the build-up to the Christmas selling period.

Ultimately the state of the economy and the governments stewarding of fiscal and monetary policy play a leading role here.  We know that the 80’s and 90’s were decades of unprecedented growth and the 2000’s was a decade of payback with two severe crashes the Dotcom bust (2000) and the Financial Crisis (2007), this is reflected in the chart above.

From 1980 to 2000 January to June were positive and October to December also, leaving only August and September not 100% positive in terms of gains.  That is 10 of the 12 months.

Let’s bring the research up to date

The below chart brings the research up to date with the latest 5 years of data.

Here we can see that January to April has been strong, also in July and September through to December.  Only three of the 12 months being on average losers.

So the best months are?

Well, statistically, September through to April have been good months, with the summers being a little hit and miss.

The stock market proverb “Sell in May and go away” has returned and holds true for the last 5 years.

So now you know when is a good time to buy

Of course what you buy is key.  If you invest in an Exchange Traded Fund that tracks the S&P 500 or any major market index this trend “should” hold true, at least until the trend changes.

If you invest in individual stocks then this market index analysis will bear little correlation to the stock you purchase.  The charts above show the performance of all the stocks in the index.

Remember, although a stock may increase or decrease due to the ebb and flow of the underlying market direction, the fundamentals of the stock you purchase combined with your timing will ultimately determine the long-term profitability of the investment.

May the trade be with you.