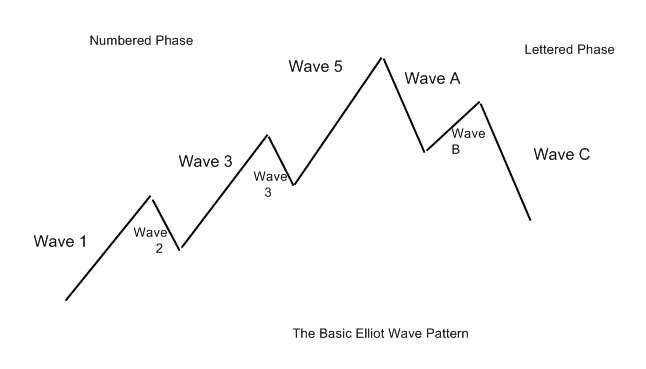 Ralph Nelson Elliott created the Elliott Wave Principle in the 1920s, and it is an inciteful look at how stock market prices move not in random distribution but in regular recurring cycles or waves.

In Elliott wave theory, the hypothesis suggests that any major market move is a cycle, and inside every cycle, there are 8 Waves. The Cycle is classified as the first leg in a primary bull market or primary bear market.

As with the business cycle, there are times of growth and times of decline, which are largely attributed to the macroeconomic situation, specifically monetary and fiscal policy.  An Elliott Wave cycle could be the first bull market in an economy emerging from a recession, for example.  Or it could be the second bull market after a market retracement during a strong overall economic revival.

Explanation of Elliott Waves in a Bull Market

This completes the cycle, and we start from Wave 1 again.

In this example, we apply Elliott Wave Theory to the emergence of one of the best all-time Bull Markets in history – 2009 to 2018. The chart below is the exact bottom of the 207 to 2009 financial crisis bear market.

As you can see here, this S&P move is actually a classic textbook Elliott Wave.

Elliott Wave Example 2: End of a Bear Market to Start of Bull Market

In 2013 the U.S. markets had hit new all-time highs and seemed to be happily advancing despite lackluster economic data.  This example shows how to apply Elliott Wave theory both to the end of a bull market and the beginning of a brand new baby bull market.

In this chart, I have mapped approximately the three main waves of Elliott Wave Theory.

Elliott wave theory suggests that major bull markets propel upwards in 3 primary waves.  After the third impulse wave, we then see a primary downward trend bear market, to set us up for the next round of impulse waves up.

The 9 Types of Elliott Wave

The key here is the ability to zoom in and out on different timeframes to spot the waves. Intra-day minute by minute charts, or long-term multi-decade charts, the waves are usually perceivable.

The Problems With Elliott Wave Theory

When will that occur? Well, this is the key question.  The final impulse wave is normally the longest according to the theory, and in this instance, that certainly holds true.

There are some caveats with the Elliott wave theory.  The first is that it is proven accurate and statistically relevant only on highly liquid stocks or markets, where there is less likelihood manipulation of prices by a “few strong hands.”

Elliott himself warns us of this.  This means that the not so liquid elements of the market are not applicable; which means approximately 65% of the total market.

I literally scratched the surface of Dow Theory and Elliott Wave Theory. I would strongly recommend you understand these concepts.

Before you jump headlong three months of studying and analyzing Japanese Candlesticks manually, I would highly recommend you use the power of modern stock...

Screening for stocks is one of the most critical elements in any investing strategy.  Whether you are a day trader scanning the stock market...

Are you looking to invest in stocks and build a portfolio of equities? You will need a service that will be able to help...