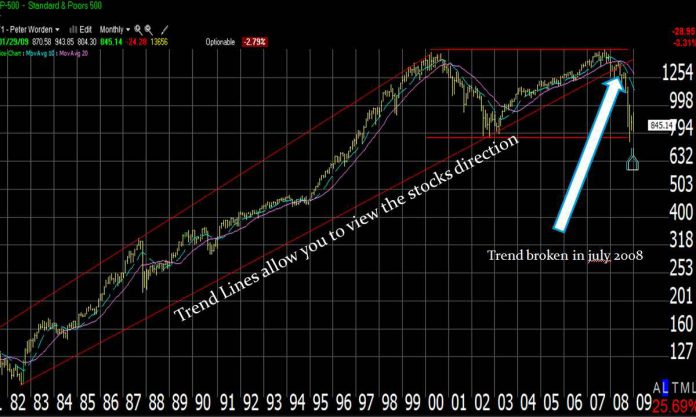 What is happening in the world. ahhhhh Don’t Panic !!

What is happening in the Market
Here you can see a chart with “trend lines” that help us view the direction of the market, and when the market breaks it current trend. You will learn more about Drawing Trendlines in a future section.
Interesting to note that the SP-500 gave us a warning of the violent downturn in July 2008.

What is happening in Sub-industries (January 2009)
The key point here, as you can see from this table, is, no matter what is happening (within reason) in the marketplace, there are always winners and losers.
In the height of this recession, you can see below, Music and Video stores, increase on average 32.78% in the last 4 weeks.

This was followed closely by Non-Metallic Mining, Semiconductors, and Long-Term Care Facilities and toy stores.

People still have the need to spend. Although they seem to be spending on smaller ticket items, rather than a 42”plasma TV, they are renting DVD’s, or buying Music. Or spending money in Toy Stores / Hobby Stores (the children’s toys are always the last thing to be axed in a recession, “parents protecting the Children”

Looking at the best industries, and examining the leaders is always a good source of future winners on the stock market.
Make up your own mind what the reasons are for these industries to be performing well, however the point is, “they are performing well”

There are thousands of stock market apps on the Android Play store but the key is to find a company offering a useful service...

We have spent countless hours reviewing and testing the best iPhone Apps for stock market news, trading, charts, social and learning, so you don't...