Home Investing in Stocks What Factors Caused the 2008 Financial Crisis

What Factors Caused the 2008 Financial Crisis

The financial crisis is nothing new a crisis occurs every 20 years or so where some event occurs to cause a correction in the markets and widespread panic to investors. The recent Credit Crisis is different only in the fact that the pullback was so rapid and volatile. The SP-500 has pulled back to the 2003 lows in 3 months. When the tech bubble burst in 2000, it took three years for that pullback to happen.

Massive failures in the banking systems and a lack of regulation has largely been attributed as the main cause, of the domino effect.

A severe drop in demand occurred because of the financial crisis; people are already in debt, and cannot finance new debt; therefore, they are reducing their spending.

Increase in unemployment: as demand reduces, so we need fewer jobs to make the products that nobody wants anymore.

Market Volatility: Stocks and shares have become very volatile (this happens when people get too emotional), and have nosedived, to below the 2003 crash.

What Happened in the Stock Market

Here you can see a chart with “trend lines” that help us view the direction of the market and when the market breaks its current trend. You will learn more about Drawing Trendlines in a future section.
Interesting to note that the SP-500 gave us a warning of the violent downturn in July 2008.

What Happened in Sub-industries

The key point here, as you can see from this table, is, no matter what is happening (within reason) in the marketplace, there are always winners and losers.
In the height of this recession, you can see below, Music and Video stores, increase, on average, 32.78% in the last four weeks. 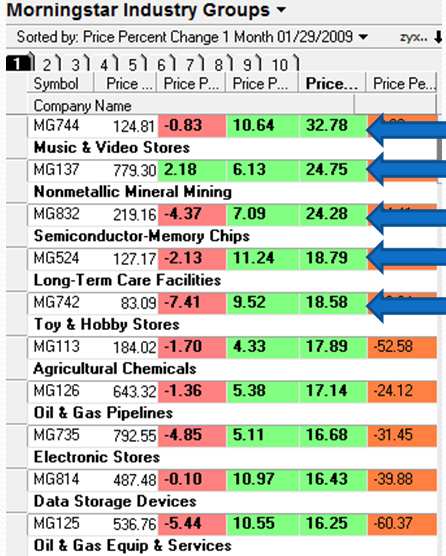 This was followed closely by Non-Metallic Mining, Semiconductors, and Long-Term Care Facilities and toy stores .

People still have the need to spend. Although they seem to be spending on smaller ticket items, rather than a 42″ plasma TV, they are renting DVDs or buying Music. Or spending money in Toy Stores / Hobby Stores (the children’s toys are always the last thing to be axed in a recession, “parents protecting the children.”

Looking at the best industries, and examining the leaders is always a good source of future winners on the stock market.
Make up your own mind what the reasons are for these industries to be performing well; however, the point is, “they are performing well.”

Won: 1 Academy Award – Best Documentary + Another 8 Awards and 26 other Nominations

The Best Movie About Wall Street Ever Made

I have watched this movie three times and plan to do so again; this is not some boring documentary, this is a good movie in its own right. This is a definite must-see and is easily the best movie on the list. 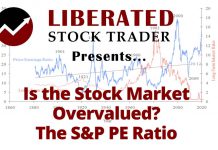 What is a Spac Stock? How to Buy Spacs & The Risks Involved 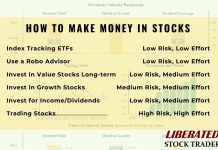 6 Time Tested Ways to Make Money in the Stock Market

Speculator vs. Investor vs. Trader In The Stock Market 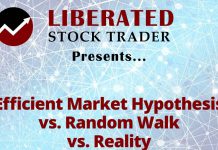 Efficient Market Hypothesis vs. Random Walk vs. Reality In Stocks 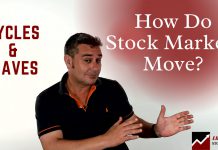 Chapter 2. Why do Stock Market Booms and Busts Occur?