The small-box discounter Aldi is considered the fastest-growing grocer in the United States. Aldi USA operates over 2,000 stores in 36 states and has plans to open 2,500 stores and expand into new states by 2022. The growth is extraordinary because they opened America’s first Aldi in Iowa in 1976. In contrast, Kroger dates back to 1883. 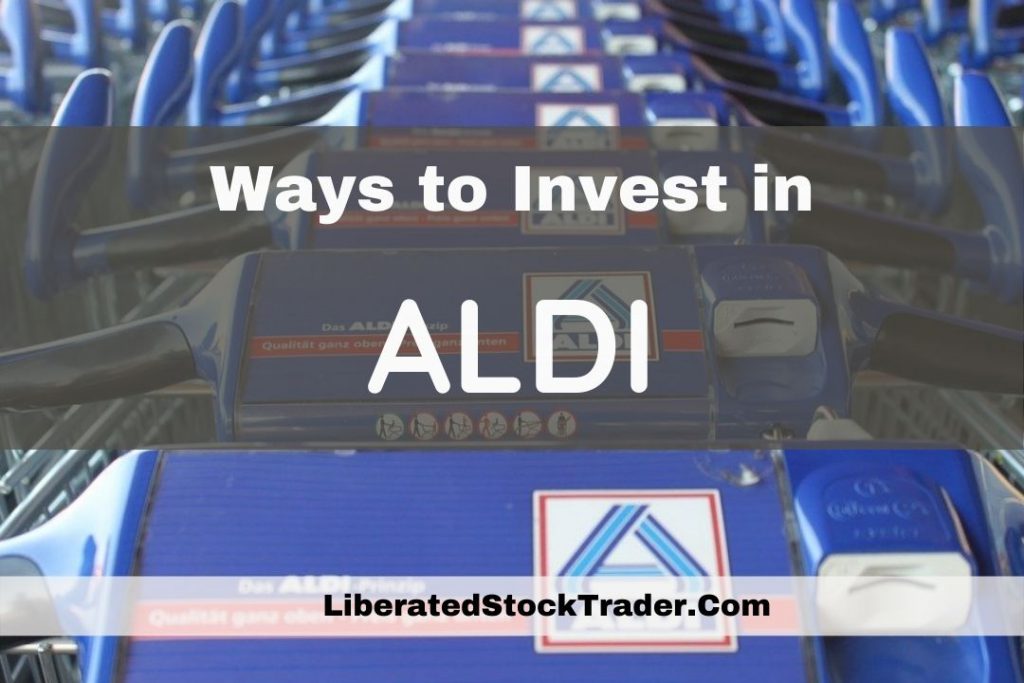 Despite being one of the fastest-growing supermarkets in the USA, investors cannot purchase shares in Aldi. Aldi is a family-owned business and does not need external financing to grow rapidly or maintain operations. The Albrecht family owns all the stock and is estimated to be worth over $50 billion.

There is no stock ticker or symbol for Aldi as the company is not publicly listed on any stock exchange either in the USA or in its founding country Germany.

Aldi’s financial information is difficult to find, but Food Industry estimates Aldi USA’s 2020 revenues at $15 billion. Thus it is easy to see why many investors search for the nonexistent Aldi ticker symbol.

Will there be an Aldi IPO?

Aldi is a closely-held private company with a management team that has never expressed interest in an initial public offering (IPO). Aldi is one of the world’s largest privately-held retailers, and under the current ownership, there will not be an IPO. If there were to be an IPO, it would definitely be hotly anticipated by investors due to its profitability and unique competitive advantage as a grocery discounter.

Chart, Scan, Trade & Join Me On TradingView for Free

Why not join me and 30 million traders on TradingView for free. TradingView is the best place to meet other investors, share ideas, chart, screen, and chat.

Aldi is known for its low prices and ruthless efficiency. Aldi slashes costs by operating smaller stores and employing small teams of staff. Famously, Aldi uses a vending machine that charges customers for shopping carts. Customers pay 25¢ for carts and get the quarter back if they return the cart. The idea behind pay-for-carts is to eliminate the need to pay an employee to gather carts from the parking lot.

A similar way Aldi saves money is to charge for plastic and paper bags. That reduces costs by encouraging customers to bring their own bags. Both the shopping cart deposit and the charging for backs is standard practice in every supermarket in Europe.

Another way Aldi saves money is to stock fewer products. The typical Aldi store sells just 1,400 of the most common grocery and other products. A Kroger Marketplace supercenter store can offer over 225,000 products under one roof.

Despite the low prices, Aldi is famous for the high quality of its products. Adli’s products contain no certified synthetic colors, no added MSG, and no partially-hydrogenated oils, for instance.

The Aldi private-label products have won over 400 awards for quality. Aldi sells many organic products, and its test kitchens hold over 30,000 taste-tests per year. In addition to groceries, Aldi sells many other products through its Aldi Finds discount program.

Aldi’s discounting has hurt traditional supermarket chains and scares managers at Walmart, CNN claims. In the United States, Aldi has a significant footprint in the Midwest and has recently entered markets such as California.

CNN reports that Aldi has attracted a cult-like following with its low prices and high quality.  A Facebook group for Aldi USA, the AldiNerd.com Community, had over 1.3 million members. Grand openings for new Aldi stores sometimes attract large crowds because of the company’s reputation.

Aldi is offering delivery services through Instacart in many US markets. Teaming with Instacart reduces Adli’s costs because Instacart’s workers pick and pack grocery orders and deliver the orders in their own vehicles.

Both Aldi brands operate over 10,000 stores in 16 countries worldwide. The United States is Aldi’s largest market outside Germany. Other major Aldi markets include the United Kingdom, where Aldi has successfully challenged Tesco on its home turf.

Not even Walmart (WMT) has been able to compete with Tesco in British markets. Walmart exited the UK by selling its majority ownership in the British grocer Asda Group in October 2020, Supermarket News reports.

3 Ways to Invest In Aldi’s Competitors

Fortunately for investors, Mr. Market offers many alternatives to Aldi. There are several large grocers and discounters you can buy as an Aldi alternative.

Kroger and the Ocado Group PLC (LON: OCDO) plan to build 10 Customer Fulfillment Centers (CFC) in the United States. The CFCs are automated warehouses where robots will pull and pack grocery orders for direct delivery to customers.

They will use contractors such as Instacart to deliver the groceries to customers’ homes. Ocado and Kroger are building CFCs in several of America’s largest metropolitan areas, including Chicago, Dallas, Atlanta, and Washington DC, Supermarket News reports.

Kroger is an excellent Aldi alternative because it is growing and leveraging new technology to make the company a major player in the grocery-delivery business. Plus, Kroger is a cheap dividend stock and a Warren Buffett investment.

Walmart (WMT) is the world’s largest retailer operating over 11,500 stores in 26 countries under 55 banners.

Walmart’s e-commerce sales grew by 79% in the quarter ending on October 31, 2020. Walmart is the third-largest online retailer in the United States, Digital Commerce 360 estimates.

One of Walmart’s most valuable features could be its 7.5% stake in TikTok Global. TikTok Global is an American company that operates the popular Chinese video streaming app TikTok in North America. McMillon will even serve on TikTok Global’s board, CNBC reports.

Walmart could add value by becoming the leading merchant on TikTok and pioneering TikTok retail. TikTok is one of the world’s most popular and fastest-growing social media apps.

Thus Walmart is a growing company with strong e-commerce and an interesting social media presence. Walmart is also an excellent dividend stock.

I consider Walmart an excellent value and income investment because of its cheap stock and the dividends. Yet, I think Walmart has enormous growth potential because of the TikTok and e-commerce investments.

The club store Costco (COST) is America’s best-loved discounter. Costco is well-known because of its unique business model.

To shop at Costco, American customers need to purchase a $60 or $120 annual membership. Over 105.5 million people worldwide had Costco memberships in 2020 because of the brand’s reputation for low-prices and high-quality Statista estimates. Costco is experiencing impressive growth; its membership base grew from 98.5 million in 2019 to 105.5 million in 2020.

Like Aldi, Costco operates no-frills stores and sells high-quality groceries and other merchandise at low prices. In contrast to Aldi, Costco’s club stores are enormous; the average Costco warehouse is 144,500 square feet in area the same size as a square block in Manhattan.

Costco’s no-frills business model includes no traditional advertising. Instead of buying TV or newspaper ads, Costco only sends advertisements to its members. The strategy works because Costco customers are famously loyal.

I think Mr. Market overpriced Costco at $355.17 on February 5, 2021. I consider Costco an excellent growth and income stock. However, I see nothing in Costco’s financial numbers that justify that share price.

Investing In Stocks Can Be Complicated, Stock Rover Makes It Easy.

"I have been researching and investing in stocks for 20 years! I now manage all my stock investments using Stock Rover." Barry D. Moore - Founder: LiberatedStockTrader.com

Is Aldi the Future of American Retail?

I think companies such as Aldi and Costco are the future of American retail.

Aldi also operates in minority and working-class neighborhoods that many larger retailers ignore. Another underserved group that Aldi markets to is senior citizens who have limited but steady incomes (pensions and Social Security). Aldi Finds features many medical and other products that appeal to older shoppers.

I think Aldi is well-positioned to profit from America’s growing income inequality and industrial decline. Cynics will note that they center Aldi USA’s operations in the Rust Belt of the American Midwest.

The Rust Belt is a region of decaying factories and crumbling towns that was once America’s industrial heartland. Aldi USA’s headquarters is in Batavia, Illinois, in the heart of the Rust Belt.

Stock investors can profit from Aldi by looking for publicly-traded companies that share some of Aldi’s characteristics. Costco Wholesale (COST), for instance.

The success of Aldi shows that American retail is changing beyond recognition. Investors who understand those changes can profit from that process.

How to Buy Good Metaverse Stocks & ETFs in 2022

What is a Proxy in Stocks?

What is the Power Hour in Stocks?

Should Politicians Own Stocks?

This TC2000 review shows it is an excellent platform for US stock traders and investors who value robust stock charting, customizable indicators, real-time stock scanning, and a low price starting at $0.

This Finviz review and test reveals many flaws. Finviz has an effective stock screener, good market visualization, and pattern recognition, but it also has many areas of improvement.

Our Portfolio123 review reveals powerful portfolio management, a 10-year screening database, flexible reporting, and fast backtesting. Portfolio123 offers a unique mix of technical and fundamental signals, but it will take time to learn.

How to Avoid the Next Stock Market Crash 2022 [Stock System]

This PROVEN Easy to Implement System Will Enable You To Predict & Avoid Stock Market Crashes & Safeguard your Investments. As Seen in S&C Magazine